Looking Back on Three Years of Sotare

Technically, it was a re-launch and a re-birth of the brand.  The idea for Sotare actually came about in 2008.  I designed a few shirts, a website, and sold them at local band shows.  Eventually the idea fizzled out and went on hold.  I thought of it from time to time wondering what could happen if Sotare was done the right way.  In February of 2013 I begin plotting away.  By fall of 2013,  I had shirts, stickers, buttons, and more all ready to launch.   We put up the website, announced it Matt’s 12,000 Instagram followers, and went about on this crazy journey. 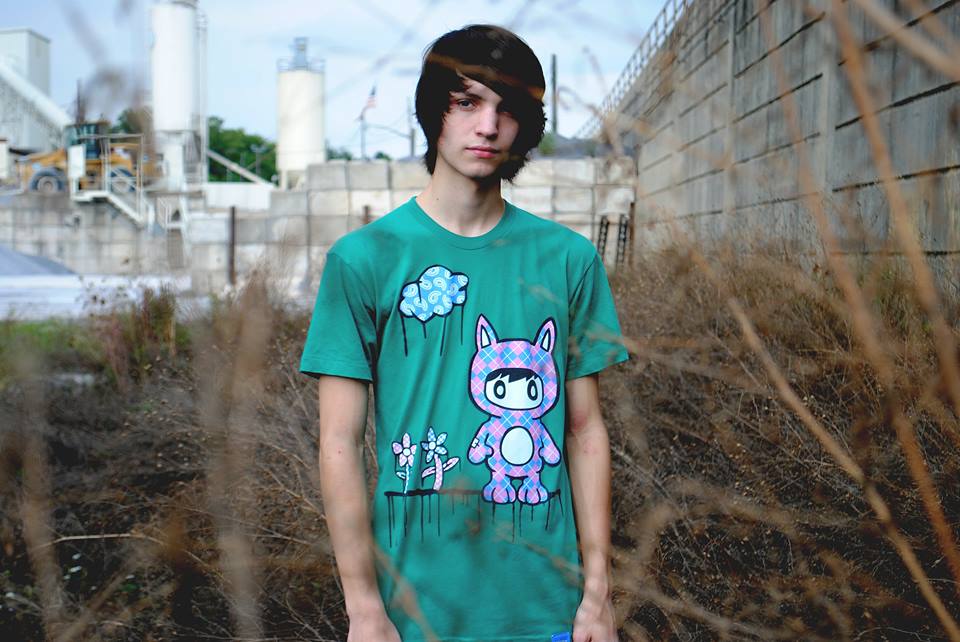 In three years, I’ve experienced quite a lot with Sotare.  Some positive, some negative.  During this time I’ve seen many other indie brands rise and fall.  I’ve watched styles change, social media change, and the brand itself evolve.

We’ve had quite a few high points in the past three years.  It’s the good stuff that keeps the brand running of course!  Making the initial online sale was exciting and memorable.  Prepping for the first live vendor market was weeks of exciting, and sometimes tedious, work.  We got to plan out the booth, package the products.  And then selling shirts, belts, posters, and a painting that first day was awesome. 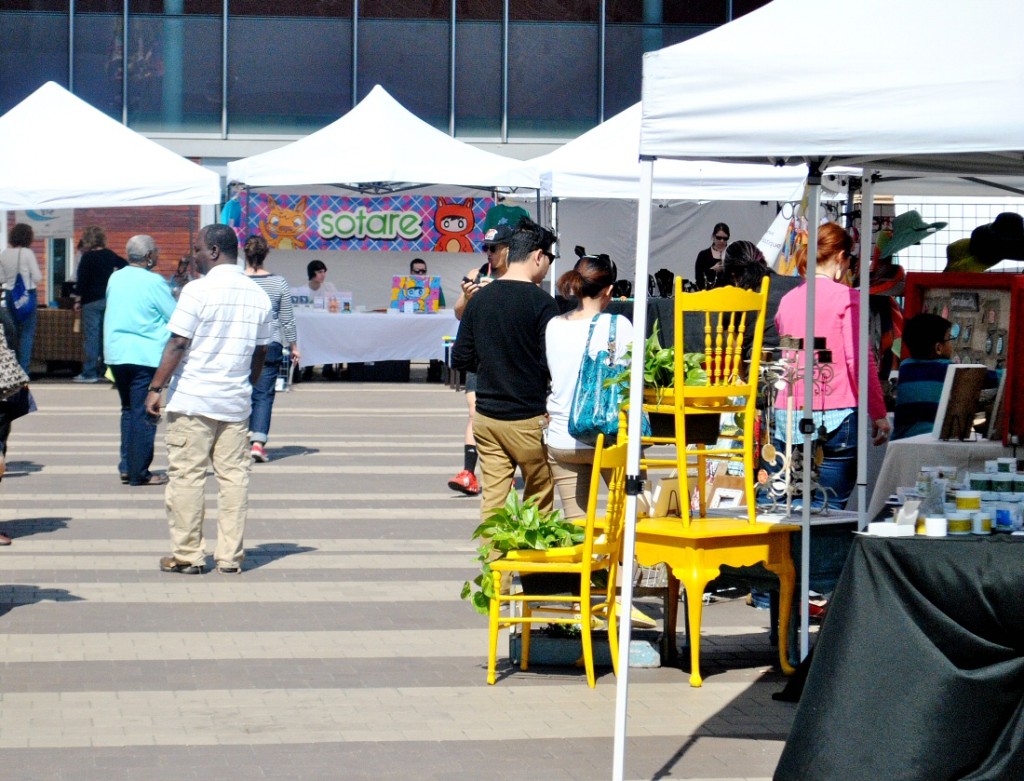 One of the biggest highlights has been UpriseFest in Shippensburg, PA.  It has been an incredible experience both times we’ve gone.  It was a big risk the first year, putting so much money on the line with no guarantee that we would make a profit or even make any back.  We took the leap of faith and went.

I was not disappointed!

We’ve met so many awesome people and sold a ton of shirts.  I’m already looking forward to going to Uprise later this year.  I think it’ll be a blast! 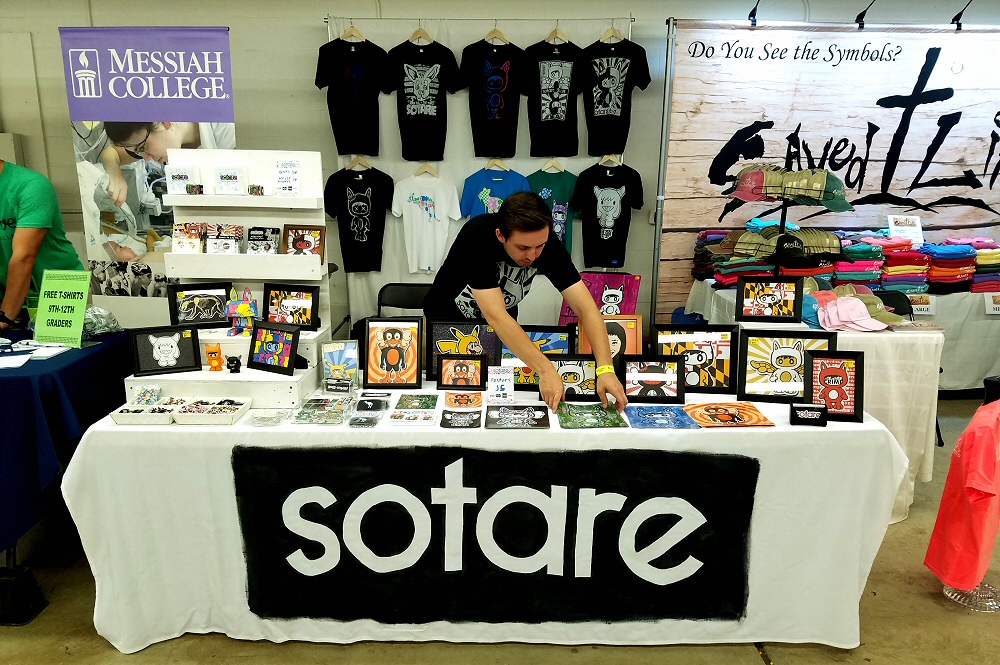 The biggest highlight over these three years has been the sheer amount of content we’ve been able to put out.  I’m an artist, so I love to create.  Sotare is basically run by myself, with the assistance of my brothers Aaron and Matt.  In the past few years we’ve released 14 shirts, 20 buttons, 10 stickers, 7 poster prints, 2 resin toys- with one being released in 3 colorways, 3 paper toys, a key chain, a belt, and more framed art that I can count. 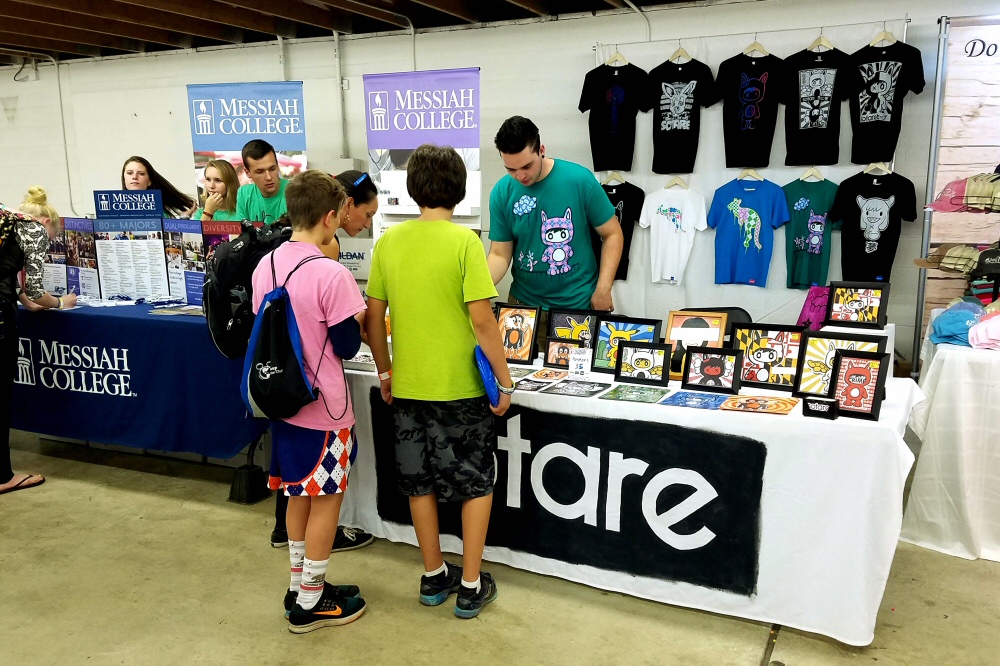 It’s a dream come true.  I wish we sold more stuff so that I could create more shirts, posters, stickers, and toys.  It’s a childhood dream come to life.

It hasn’t all been pizza parties and sunshine with Sotare either.  With the extreme highs come the lows.  I recall one time at Fenton Street Market in 2014 that was especially discouraging.  Matt and I went to set up for the day to find out the market was hosting politicians that weekend.  The place was arrayed with signs from different candidates- local and state level.  Needless to say, this meant not many people were shopping, especially not for what type of product we create.   We sold a few buttons that day… making $2.50.

Yep… not even five bucks.

It was heartbreaking.  I sat there and wondered if we should even continue with Sotare.  Yet at the same time, sitting there feeling down and trying to pass the time, I wound up drawing what would become Zombie Joey. 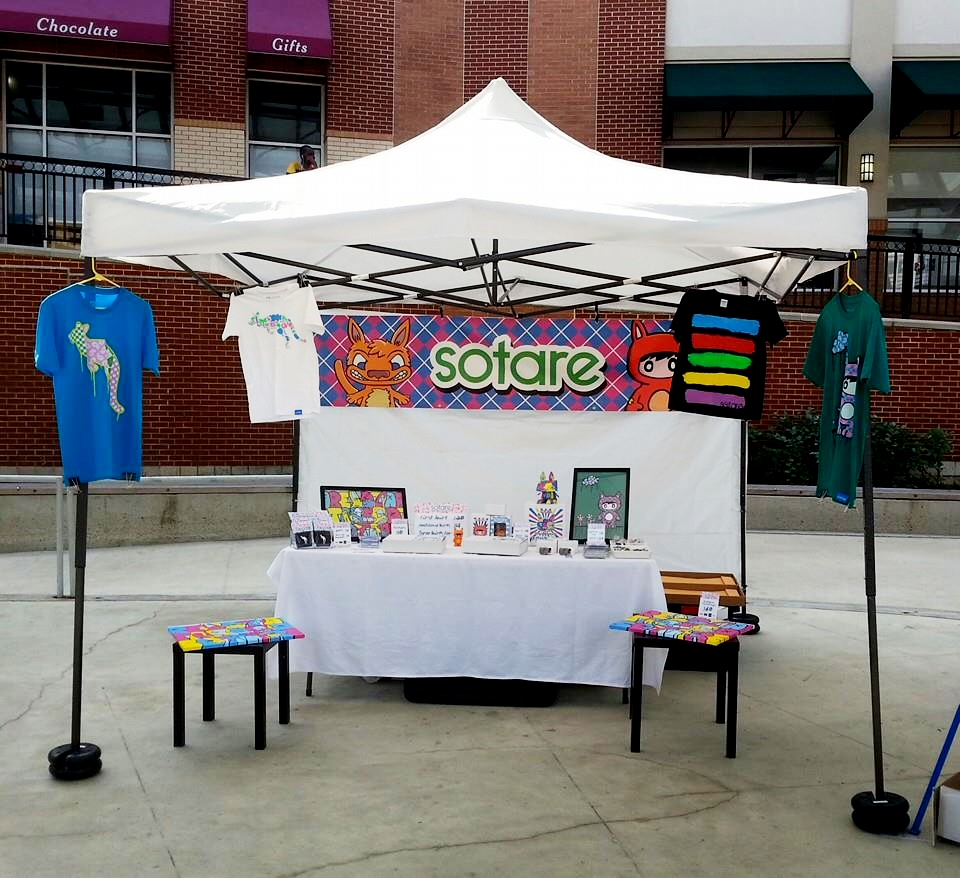 AwesomeCon this past summer was also a bit of a bummer in some respects.  We got all of the 2016 shirts printed by May so we could tag and bag them for AwesomeCon.  There were supposed to be 40,000-60,000 people.  I figured we’d make a killing.  Only problem?  No one wanted to buy shirts!  We sold three shirts the entire weekend.  Yep, three shirts.  If it wasn’t for our framed art and sticker sales, we’d have never made our money back. 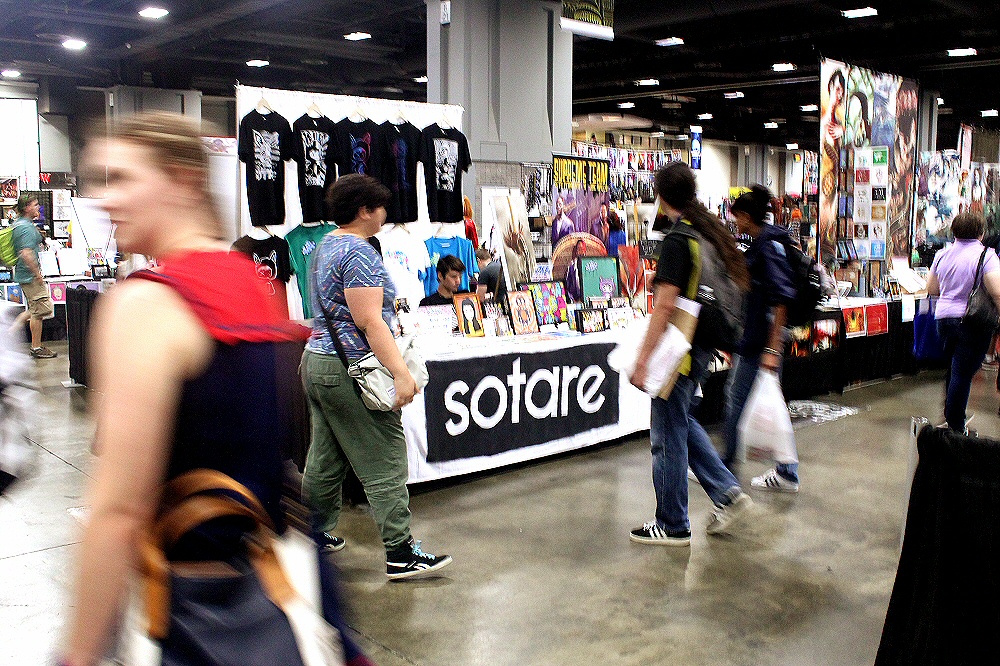 WHAT I’VE LEARNED ALONG THE WAY

I think the biggest lesson I’ve learned with Sotare has been consistency.  The brand is always evolving, from our colors to the aesthetics to the places we chose to sell.  Yet, we haven’t quit.  We’ve had some low, rough, discouraging points.  Times where I just wanted to quit and give up.

The lows come with the highs.  You gotta push through these dips sometimes in order to make your goals work.  You also have to figure out when to stick and when to quit.  I’m glad we didn’t quit.

I have put in countless hours designing products, writing blogs, taking and editing photos.  I’ve grinded away at vendor markets, traveled to conventions all around DC, PA, and Maryland, and dropped lots of dough to get spots at UpriseFest and Skatefest.  I’ve gone months without online orders.  I’ve mailed out dozens of free stickers.  I’ve submitted to blogs more times than I can count and have been rejected by half of them.

Three years later, Sotare is still kicking.  I’m proud to say that we are slowly picking up steam.  People have been buying more things online.  Some people who shop in person at events have been shopping online for more.  Our following is small, but it’s filled with the most awesome people on earth.  Check out some of the messages I’ve received over the past few months:

“ I just got your package yesterday, yay!!

Thank you for the extra stuff I really love them!<3 You have such a artistic gift in you and I am really looking forward to seeing more stuff you will make in the future! :-3 “

“Love your artwork on every piece of product you have on your site and wishing to buy more stuff in the future. Thanks for making these lovely creations and bringing them out to the world so others can love them too!”

“I’ll be sure to keep buying! Thank you so much!”

It’s worth it.  If you’re starting an art brand or indie brand- keep at it.  You have to be consistent.  Consistency is so important to success.  Just keep figuring out what works for your brand.  Keep producing shirts and accessories.  Keep going to vendor events.  Keep selling.  Keep promoting.  Keep making friends.  Keep being generous.  Keep at it!  Over time you never know what could happen.

Thank you for three awesome years of Sotare… Here’s to three more!